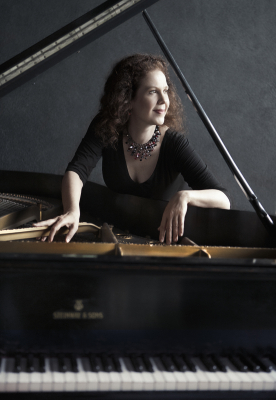 Pianist Gila Goldstein is known as a versatile musician and has captivated audiences around the world with her unique artistry and soulful interpretations. Ms. Goldstein has performed as a solo artist and collaborative pianist throughout the United States, Canada, Mexico, China, Korea, the Philippines, Europe and Israel.

Her most notable performances included the Berliner Symphoniker, Israel Symphony Orchestra Rishon LeZion, Jerusalem Symphony Orchestra, the Philippine Philharmonic Orchestra and Orquesta Da Camera in Mexico City as well as recitals and concerts at Lincoln Center and Merkin Hall in New York City, Progetto Martha Argerich in Lugano, Beijing Concert Hall in China, Seoul National University in Korea, the Purcell Room at the South Bank Center in London, Konzerthaus in Berlin, Musée de Louvre and Cité des Arts in Paris, Roy Thomson Hall in Toronto, Kennedy Center in Washington DC, Old First Church in San Francisco, Gardner Museum and Tsai Performing Center in Boston, Dame Myra Hess concert series, Ravinia’s “Rising Stars” Series and Symphony Hall in Chicago, ”Great Performances“ series in St. Louis, Israel’s Henry Crown Hall in Jerusalem and the Tel Aviv Museum, among others. A Board member of the American Liszt Society (ALS) and the Founder-President of its New York Chapter since 1992, she has been a frequent guest performer at the ALS annual festivals around the United States and Canada. She also performed at festivals such as La Jolla, Yellow Barn, Sonus, Summit, Colburn, OpusFest, Jewish Music Festivals in Atlanta, Pittsburgh and London and the Israel Festival.

Gila Goldstein has been a sought-after pedagogue for nearly two decades and has given numerous master classes in the USA, China and Korea. She is currently a member of the piano faculty at Longy School of Music in Boston as well as at Brown University, where she serves as the director of piano studies. Previous teaching positions included Boston University, BU Tanglewood Institute and New York University. A champion of the music of Israel’s leading composer Paul Ben-Haim for over two decades as a performer and recording artist, Ms. Goldstein has recorded two volumes of his entire piano and chamber works on the Centaur label. She obtained her music degrees in piano performance from the Manhattan School of Music where she studied with Prof. Nina Svetlanova and the Tel-Aviv University’s School of Music, where her teacher was Prof. Victor Derevianko. Both her teachers were disciples of the legendary pianist and pedagogue Heinrich Neuhaus.