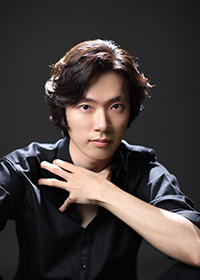 A native of South Korea, Dr. Kim made his debut at the age of 12 with Solideo Philharmonic Orchestra. He has been featured as a piano soloist with numerous orchestras in South Korea, Vietnam, and the United States, including two appearances with the Indiana University Symphony Orchestra as a concerto competition winner. His performance of Franz Liszt’s Piano Concerto No. 2 with Maestro Arthur Fagen was praised as being “not only bombastic, but intensely musical, rich in nuances, introspective, lyrical” (Herald Times). His solo performing career involves prizes and awards from the Chautauqua Solo Piano Competition, Indianapolis Matinee Musicale Competition, Ben L. Gomez Piano Competition, NSAL (National Society of Arts and Letters) Instrumental Competition, Hanoi International Piano Competition, Haneol Music Competition, and Korea Piano Society Competition.

Kim is a sought-after collaborator, having experience with repertoire ranging from major violin duos and art songs to a variety of orchestral reductions. His collaborative activities also extend to ensemble performances, including piano trios and orchestral pieces. During his studies at Indiana University, he was selected as an orchestral pianist by violin professor Jorja Fleezanis to be part of the IU Chamber Orchestra’s concert tour to South Korea in 2015.

As an active teacher and scholar, Kim has participated in multiple MTNA (Music Teachers National Association) events, such as the Collegiate Chapters Symposium, where he presented his doctoral dissertation, “Strategies to deal with the challenges of the piano solo recital: Interviews with piano faculty members and university piano majors,” and his research on “Vertical and Horizontal Listening through Basso Continuo,” utilizing his specialties in Early Music. Recently he joined “Tunaweza Kimuziki (Through Music All is Possible),” a project that connects music educators in the US and students in Kenya, led by IU professor Kimberly Carballo.

Kim’s early education in music composition in his teenage years led him to his current activities as an arranger of classical, jazz, and pop songs for solo piano and four-hands piano settings. These arrangements are performed by him and his wife, pianist Elizabeth Yao, and uploaded to his YouTube channel. More than 2000 copies of his music have been sold on Musicnotes through his official partnership with them as a Signature Artist.

Kim earned his Doctor of Music in Piano Performance with double minors in Music Theory and Early Music (Harpsichord) at Indiana University, as a protégé of Professor Arnaldo Cohen, with whom he also completed his Master of Music degree. His studies in early keyboard were with renowned harpsichordist and fortepianist Elisabeth Wright. Kim earned his Bachelor of Music in Piano Performance from Seoul National University, where he studied with Professor Hyoung-Joon Chang, and graduated as valedictorian of his class.