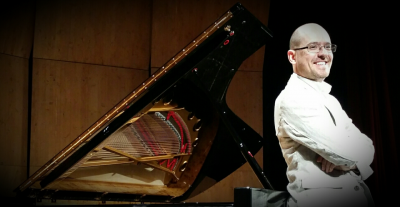 Italian native Roberto Plano performs regularly throughout North America and Europe – notably at Lincoln Center, Sala Verdi, Salle Cortot, Wigmore Hall and the Herkulessaal. He has appeared with orchestras all over the world, under the direction of renowned conductors such as Sir Neville Marriner, James Conlon, Pinchas Zuckerman, Miguel Harth-Bedoya. He has been a featured recitalist at the internationally acclaimed Newport Festival, PianoSummer Festival at SUNY, the Portland Piano Festival, Ravinia Festival and the Gilmore International Keyboard Festival (USA), Chopin Festival (Poland), the Encuentro de Musica y Accademia de Santander (Spain), the Bologna Festival – Great Soloists (Italy), and many others. He played with String Quartets such as the Takacs, Cremona, St. Petersburg, Fine Arts, Jupiter, Muir, as well as soloists such as Ilya Grubert, Pavel Berman, Jiri Barta, Enrico Bronzi, and in duo with his wife Paola Del Negro. Mr. Plano was the First Prize Winner at the 2001 Cleveland International Piano Competition, Prize Winner at the Honens, Dublin, Sendai, Geza Anda and Valencia Competitions and Finalist at the 2005 Van Cliburn and the Busoni Competitions, in addition to having won 15 First Prizes in National Competitions in Italy. Mr. Plano’s engaging personality has made him a favorite guest on radio programs such as NPR’s Performance Today. As a result of his success at the 2005 Van Cliburn Competition, he appeared in the film documentaries “In the Heart of Music” and “Encores” (together with James Conlon and Menahem Pressler) which was aired on PBS stations across the United States, as well as in Europe through the satellite channel MEZZO. In 2006, Plano was chosen to participate in the DVD recording filmed in Paris by ARTE at Salle Cortot; and together with Philippe Entremont, a second video project about the music of Mozart, broadcast by NHK in Japan.
He has appeared twice on the cover of the most important music magazine in Italy, Amadeus. He has recorded more than 20 commercial CDs for Briliant, Sipario, Azica, Arktos, DaVinci, Concerto, being awarded five stars by several music magazines. and he recently released several World Première CDs with music by Andrea Luchesi (1741-1801). Mr. Plano gave the world premiere of two Luchesi piano concertos with the Busoni Chamber Orchestra in Trieste, Italy; the US premiere took place with the Toledo Symphony, Stefan Sanderling conducting. Mr. Plano’s debut recording with DECCA Classics was also recently released, featuring the “Harmonies Poetiques et Religieuses” by Liszt, which have not been recorded by Decca since the 60’s. Recent events include soloist appearances with Kremerata Baltica at the Portogruaro International Festival in Italy, with the Royal Camerata at the Athenauem Theater in Bucarest (Romania) and with the Boston Civic Symphony at Regis College, and recitals and chamber music concerts at the Stellenbosh Symposium, Sudafrica, at the Yamaha Center, Taiwan, at Vivace Vilnius Festival in Lituania, Gijon International Piano Festival in Spain and at the Boston Athenauem in USA. He was also invited to give several concerts in Russia, including two concerts at the Kremlin State Palace in Moscow, and a 10-concert chamber music tour in China with The Juilliard School’s faculty Laurie Smukler and Darrett Adkins.
Mr. Plano studied at the Verdi Conservatory in Milan, the Ecole Normale “Cortot” in Paris, where he earned the Diplôme Supérieur de Concertiste, obtaining first prize with unanimous decision and congratulations of the Jury, and the Lake Como Academy. His master classes, taught at his own music academy and worldwide, are in high demand. Mr. Plano has been described by The Chronicle in Glens Falls, NY, as the “Pavarotti of the Piano” for his lyricism and defined by Chicago radio commentator Paul Harvey as the heir to Rubinstein and Horowitz. In Italy, he has appeared on the cover of the most important music magazine, Amadeus, and has been awarded several prizes, including the Lumen Claro, previously assigned to such noteworthy people as soprano Barbara Frittoli, stylist Ottavio Missoni, and economist Mario Monti. NY Times music critic Anthony Tommasini has written: “This Italian pianist showed artistic maturity beyond his years… there was a wonderful clarity and control of inner voices in his performances…” After joining in 2016 the Faculty of Boston University he has been recently appointed as Associate Professor of Piano at Indiana University Jacobs School of Music. In January 2018 he won the American Prize in the solo professional division.