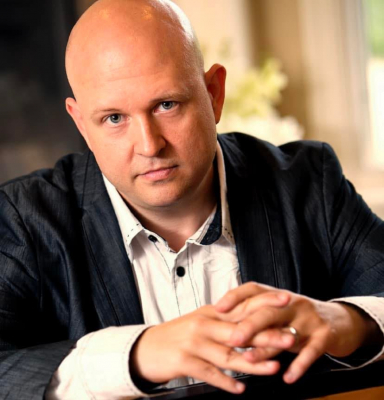 Steven Spooner is Professor of Piano at the Peabody Institute. His compelling performances have been hailed worldwide. “Such breadth and variety of difficult pieces made me wonder at first if this (recording) was a hoax,” noted one critic. “But, no….Steven Spooner is the real deal, a pianist of apparently limitless raw technique that’s almost note perfect.” (American Record Guide.) He has released more than 40 recordings, including a project of 16 CDs honoring his pianistic heroes called Dedications. At times he daringly reinvents the solo recital, allowing audiences to vote on the spot for one of five programs he has prepared. A major prize winner at 7 international competitions, he has studied at the Paris Conservatoire, Moscow and Tbilisi Conservatories, and Indiana University.

Spooner has served on the faculty of some of the most prestigious summer festivals, and is increasingly in demand for his masterclasses across the globe. He is Artistic Director of the Chicago International Competition and Festival. A dedicated and caring teacher of students from around the world, he has formed winners of multiple prizes at important competitions. Steven Spooner is a Steinway Artist. www.stevenspooner.com.